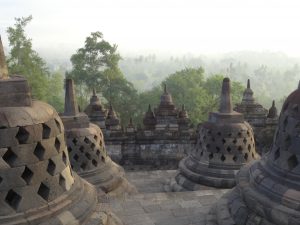 The Borobudur is the biggest and oldest Buddhist temple in the world. UNESCO recognised the Borobudur as World Heritage Site. In 1814 the Borobudur was rediscovered after the temple was hidden for hundreds of years, covered under ashes and vegetation . The temple is still full of mysteries.

New secrets were revealed during different restorations. On the lower rim of the Borobudur, which was covered under the ground for a long time,  reliefs were found. The Law of Karma pictured in the reliefs on “the hidden base” of the stupa. These  reliefs teach that good deeds are rewarded and bad deeds are punished. 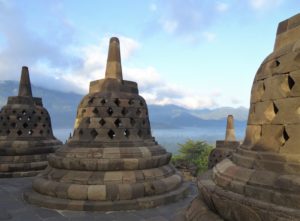 The place where the Borobudur is built has been carefully chosen. The temple is built near the place where the rivers Ello and Progo meet and the hill called “Tidar”. About 1250 years ago, this place was considered the most suitable place. The hill Tidar is where the gods “nailed” the island of Java to the earth, to prevent the island from sinking or floating away. 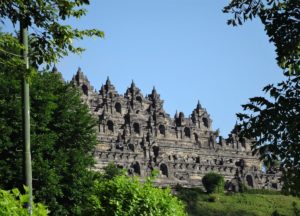 The temple is shaped as a stupa and built around a hill. If you count well, you can count 504 statues of Buddha. The walls consist of 2672 sculptured reliefs. In total, if arranged in a row, these sculptures have a length of 5 km.
There are 72 bell-shaped stupa’s encircling the central stupa. Some of these stupa’s contain a Buddha statue, some are empty, and some statues are decapitated. In the past centuries, some statues and buddha heads were stolen and ended up in museums far away, or in the homes of the rich.
There is a legend that if you can touch the Buddha with his legs crossed, any wish you have will be granted.

The central stupa at the top of the Borobudur can only be entered by Buddist monks. Don’t be afraid, you won’t miss much; this stupa represents eternity and is therefore empty. 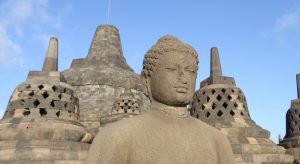 In Mendut temple there are three big Buddhist statues from the 9th century. In this temple, couples who would like to have children, pray for good luck. There is also a Buddhist monastery where monks are studying their religion.

At the Pawon temple we only find the temple, there are no statues in there. Next to the temple there is a beautiful waringin tree.