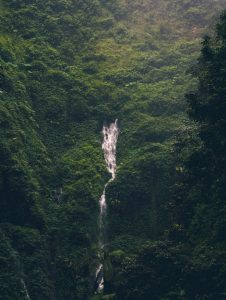 A famous poem from the 14th century tells us that Madakaripura was a present from king Majapahit, to the military commander Gajah Mada.

The Majapahit Kingdom (1293-1500) stretched from southern Thailand and Malaysia to Brunei and East Timor. This great kingdom was the result of the talents of Gajah Mada, the military commander.

Gajah Mada is said to have obtained his extraordinary talents by meditating in the cave behind the Madakaripura waterfall.

At the end of his life, Gajah Mada chose this waterfall for his final meditation before disappearing from earth. Here he reached the highest possible goal (“Muksha” in ancient Javanese).

The remembrance of Gajah Mada is still celebrated through meditation and rituals. This waterfall is not only an extraordinary natural phenomenon, but also historically and spiritually very special.

This waterfall always flows, even in the dry season and that is why this waterfall is also called the “eternal waterfall”. At the entrance there is a statue of Gajah Mada, after a walk of 20 minutes you reach the Madakaripura waterfall. During this tour you can get wet by the waterfall. Therefore raincoats are sold at the road.

Book a private tour for several days so that you can discover East Java at your own pace. You can then travel to Bali or further across Java. Inquire about all options for customized transport >>>