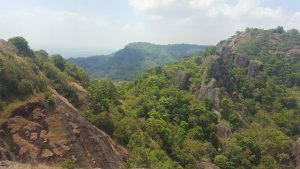 About an hour’s drive from Yogyakarta is the ancient Vulcano Nglangeran.

The ancient volcano Nglanggeran was active until 60 million years ago and is one of the oldest volcanoes in Central Java. The mountain was formed by ancient volcanic material and has two peaks namely the western and eastern peak with a caldera in the middle.

A great walk to the peak

Nglanggeran is easy to climb. In just 1.5 hours of walking through the beautiful scenery of UNESCO Geopark Gunung Kidul, you reach the western peak. Here you have a beautiful view of the landscape, the uniquely formed mountains and the cloudy sky.

In 2017, the village won the ASEAN Community Based Tourism award and was named one of the best tourist villages in the world by the UNWTO in 2021.
In the village you can see a number of local activities (for example dance, music or mask making), in which you can often participate yourself.
Chocolate is made and sold locally. Delicious and straight from the makers. There are also sporting options such as rock climbing or swinging in the mountains.
Near the village is a beautiful waterfall.
Finally, it is also possible to spend the night here in the region in a homestay close to people’s homes or even a glamping (glamor camping) with a beautiful view. The best way to get to know the real Javanese life!