Pekalongan is located on the north coast of Java and is known for its batik. Pekalongan is the first city in Southeast Asia to become a member of “UNESCO’s World’s Creative Cities Network”. 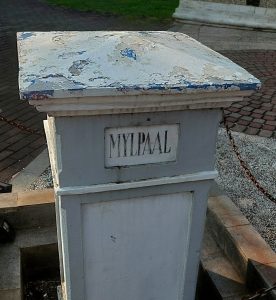 The name PEKALONGAN probably comes from the word “A-PEK-HALONG-AN”, which means “income from the sea”.

The city has been around since 1622. In 1753 a fort was built here near the river. This fort was known as Fort Peccalongan. The fortress no longer exists.
The city is located on the Grote Postweg (Jalan Raya Pos), a road of about 1000 km long that Daendels had built on Java within a year when the Netherlands was occupied by France. A road that has cost many lives. A milestone of this road from 1808 can still be found. 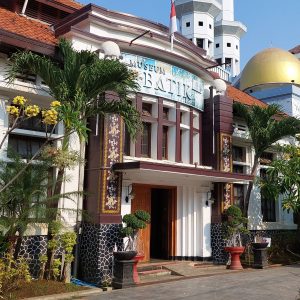 The batik museum exhibits beautiful batik cloths from all over Indonesia. Here you can also learn to batik yourself. A beautiful souvenir.

In the late 19th century, the batik industry flourished. A well-known Dutch batik designer from Pekalongan was Eliza van Zuylen (1863-1947).

Several batik workshops and batik shops can be found in the Kauman district. Here you can buy the most beautiful cloths for a great price. 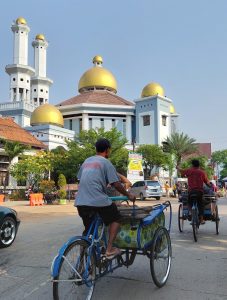 Near the batik museum is an old lemonade factory from 1920. At that time, this lemonade was a real luxury. Even now, the lemonade is still made according to the old recipe. The factory is closed on Fridays.

What’s more fun than discovering the city with a becak? Let yourself cycle around with the wind in your hair. Becak drivers know all the nice places in the city and know where to find the nicest eateries. Pekalongan still has many old buildings with a story. This way you can see the city up close without getting tired. 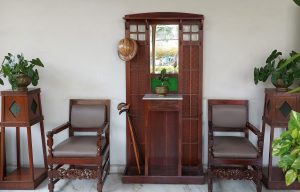 The house built by Hoo Tong Koey and Tan Seng Nio in 1918 is now a hotel. The lobby of the hotel is the old house. Their ancestors had migrated to Pekalongan from southern China in the 18th century. Hoo Tong Koey was the fourth generation of Chinese (Peranakan) descent. From their home they started making and selling batik.
In 1927, Tong Koey was appointed “Lieutenant der Chinezen” by the Dutch. In addition to this beautiful history, the hotel has modern rooms that are equipped with every luxury.
You can also rent bicycles here.