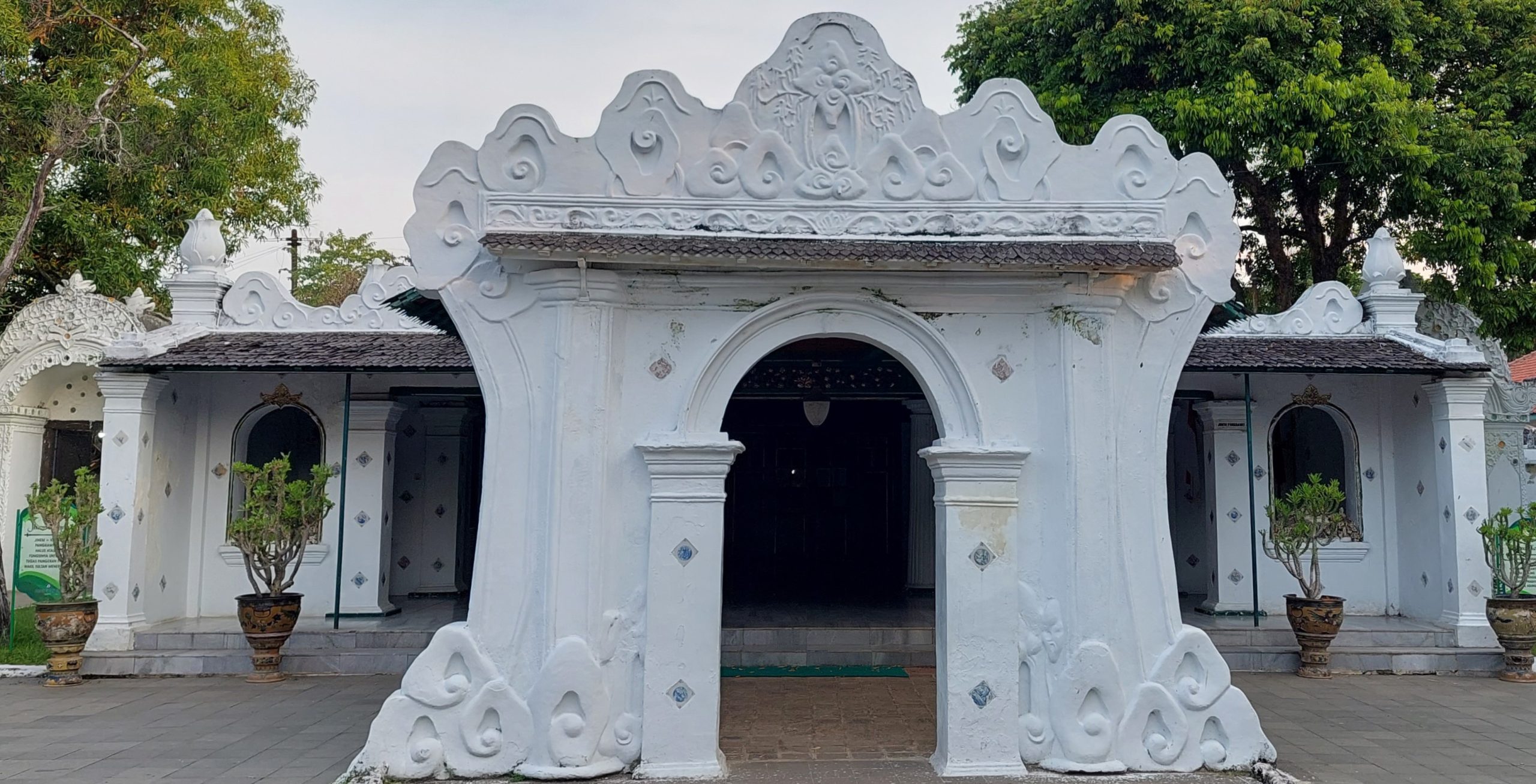 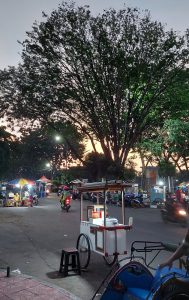 Cirebon is an old city on the northern coast of Java. According to an old manuscript, Cirebon started as a small fishing village in the 15th century. More and more foreign traders came to trade their goods in the harbour and Cirebon became the centre of the region. Chinese and Arab traders settled in the city already long ago.

It is said that “Cirebon” derives from the Javanese word, caruban, which means “mixed”, because the city is influenced by Sundanese, Javanese, Chinese, European and Arabic culture.

An other explanation is that the name derived from the Sundanese words “ci” (water) and “rebon” (shrimp), which is also logical because the main source of income in the city used to be fishing. 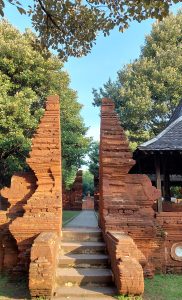 Cakrabuana is the founder of the city. He was born in 1423 and descended from the powerful Sundanese Padjadjaran king. When he and his sister converted to Islam, they were expelled from the palace.

Cakrabuana took his sister on one of his trips to Mecca to visit the tomb of the Prophet. In Mecca, the princess received a proposal from the monarch Bani Israil. The princess agreed to become his wife, but only if the monarch would allow their son to travel to Java to tell the people of Java about Islam. The monarch agreed, and when a son was born in 1448, he left for Java, when he was old enough. He settled in Gunung Jati, near Cheribon. He gained more and more followers who called him “Sunan Gunung Jati”. He made Cirebon great and prosperous and enjoyed a lot of respect because of his origin, wisdom and knowledge. He is one of the Wali Songo, one of the nine propagators of Islam in Java.

Gunung Jati married the daughter of the Chines emperor, Princess Ong Tien, while visiting China. The descendants of Sunan Gunung Jati therefore represent the Sundanese, Javanese, Arabic and Chinese culture. The gifts the Chinese princess received from her father (ceramics) were kept for a long time at the tombs of the sultans. Later the ceramics were transferred to the museums of the kraton about 90 years ago. The motifs used to decorate the ceramics were inspiration for batik patterns.

The tomb of Sunan Gunung Jati is located on top of Pasirdjati Hill in Astana kampong, six kilometers from Cheribon.

The tombs are walled and divided into sections. The tomb of the Sunan is in the ninth square, at the very top of the hill. In the other sections are the cemeteries of his descendants. Tiles, plates, and other porcelain ornaments are bricked into the walls.
A gate in the wall gives access to a mosque and from here you can see the roof of the tomb of Soenan Djati. 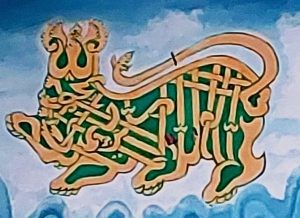 In 1677, the Sultanate of Cirebon was split between four different decendents of the royal family, each with their own palace (kraton). The four kraton are respected by everyone but no longer have a political function. The four kratons are named Keraton Kasepuhan, Kanoman, Kacirebonan en Kaprabonan. 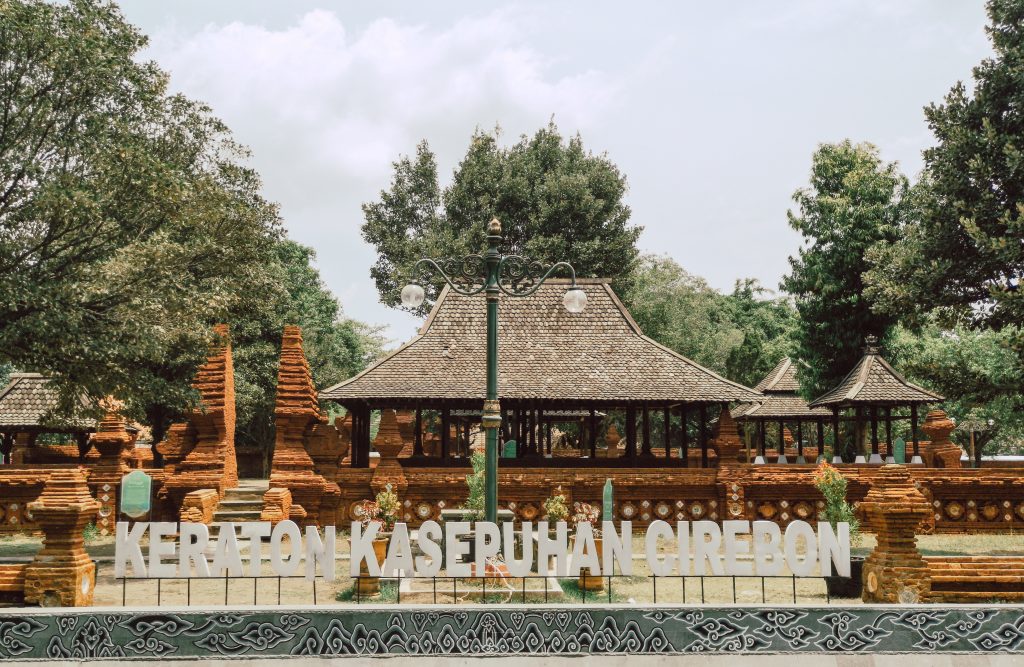 Kraton Kasepuhan has a beautiful royal carriage in the shape of the “Singa Barong”. The Singa Barong is a mix between the Singa, the lion, the king of all beasts and the Barong, a mythical creature and the king of the spirit world.

The Singa Barong has the body of a lion, the wings of the Buraq (Islamic element), the trunk of an elephant (Hindu element) and the tongue of a dragon (the Chinese element).

Close to the Kasepuhan kraton is the old Great Mosque ‘Sang Cipta Rasa’. 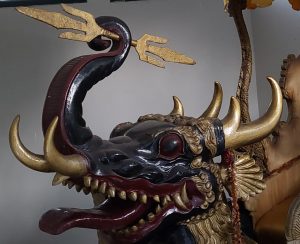 These mythical creatures Macan Ali, Singa Barong, and Paksi Naga Liman can also be found in the batik from this region. 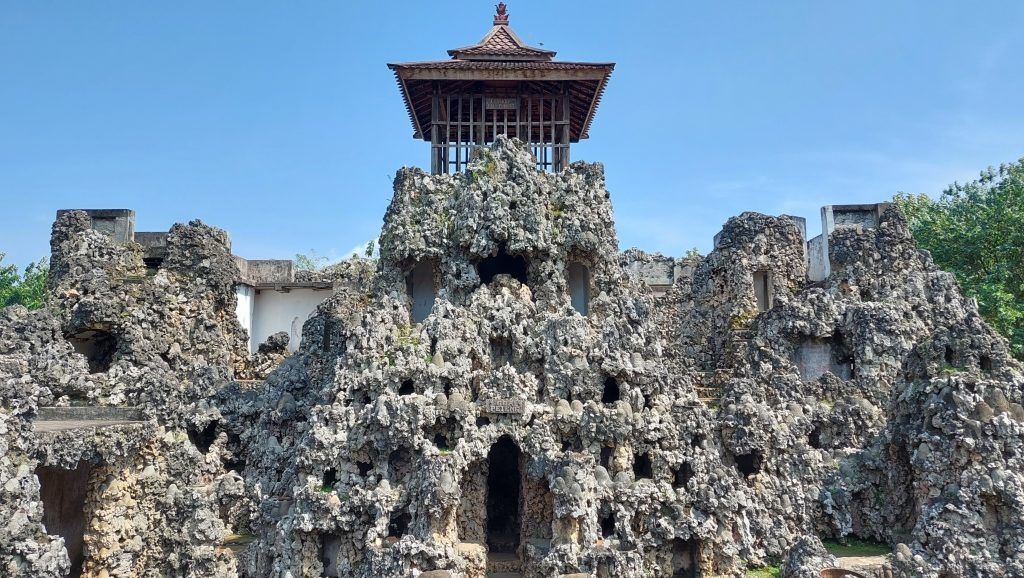 The Water Palace of the Cirebon kraton was built in 1703 in Chinese style by order of Sunan Gunung Jati’s great-grandson, the sultan Kasepuhan.

The Sultan liked to come here to meditate. Here were beautiful caves and gardens with ponds and waterfalls. Influences from different cultures can also be found here.

The story goes that the Chinese master builder was killed by the Sultan after the construction was completed to prevent him from building such a beautiful palace for others.

Others say this story was derived from the history of the Chinese master builder who helped the Dutch with the restoration of the Water Palace in the 19th century and was accused of having passed on the secrets of the caves and corridors to the Dutch. Which he paid for with his life.

Goa Sunyaragi consists of the words Goa (cave) Sunya (alone, lonely) and Ragi (body) and refers to the purpose of this Water Palace: meditation.

The Water Palace can still be visited and is best visited early in the morning.

In front of the entrance to Peteng Cave is a statue of a Sunti virgin. According to local legend, anyone who touches the statue will remain single for life. 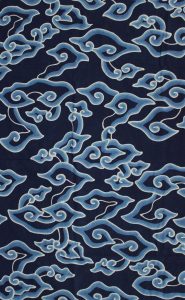 Cirebon is known for beautiful batik patterns, which are influenced by Chinese, Arabic and Javanese culture.

The most famous motif from this region is originally blue and depicts a cloudy sky: the Mega Mendung motif. You also have the Wadasan motif (also called Cadasan) and the Taman Arum motif.
All these motives were originally reserved for the sultanate of Cirebon. Only the sultan and the sultan’s family were seen as spiritually powerful enough to wear this motif.

The Mega Mendung pattern depicts clouds and was designed by the founder of the city of Cirebon, Cakrabuana  One day while standing by a calm river, he saw the reflection of the clouds in the water. At that moment, this pattern came to his mind.

The Taman Arum motif depicts the Arum Sunyaragi park, the old water palace of the sultan.

The town hall of Cirebon was built in 1926 in the beautiful Art Deco style of the Amsterdam school. The building is decorated with shrimps by Anthon Maas. 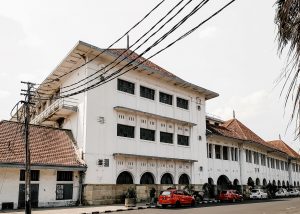 The BAT building was built in 1924 and was designed by architectural firm Eduard Cuypers & Hulswit in Art Deco style. This large cigarette factory had a production capacity of 17.5 million cigarettes per day, but was closed in 2010. Now the BAT building is empty.

The office of Bank Indonesia Cirebon is so beautiful that the building even appeared on the Rp 500 banknote issued in 1988.

The Escompto company was a commercial bank that mainly provided credit to trade and industrial companies. As in many other cities, they were also located in Cirebon in a beautiful building.

At first glance, this building resembles the Merdeka Palace in Jakarta, only smaller. This building was designed by Van De Berg, a Dutch architect in 1865. South of the building is a field where dozens of spotted deer are kept, just like at the palace in Bogor.

The station was built in 1912 when the track was extended to Cirebon.