Surakarta (also called Solo) is located on the eastern slope of the Merapi volcano near the Bengawan Solo river. The city has about 580,000 inhabitants and is densely populated.

Together with Yogyakarta, Surakarta is considered the heart of Javanese culture, full of rituals, traditions and art.

After the division of the Mataram Empire in 1755, two principalities arose: one in Surakarta and one in Yogyakarta. The name of the city of Solo was then changed to Surakarta.

The Sultanate in Surakarta mainly focuses on Javanese art such as batik art, Javanese dance and wayang kulit (shadow puppetry).

Within Surakarta there are two royal houses: The Kraton of Susuhunan Paku Buwono (Kraton Hadiningrat built in 1745) and the Kraton of Sultan Mangkunegaran (built in 1787).

The Susuhunan Paku Buwono craton is a bit like the Yogyakarta craton built ten years earlier. Here too the kraton is “a city within a city”. The courtyard has sand from the southern beach of Java and symbolizes the union between the kraton and the queen of the South Sea (Ratu Loro Kidul). The rest of the palace is also full of symbolism. The buildings, shapes and colors everything has a symbolic meaning. This makes a guided tour very special. 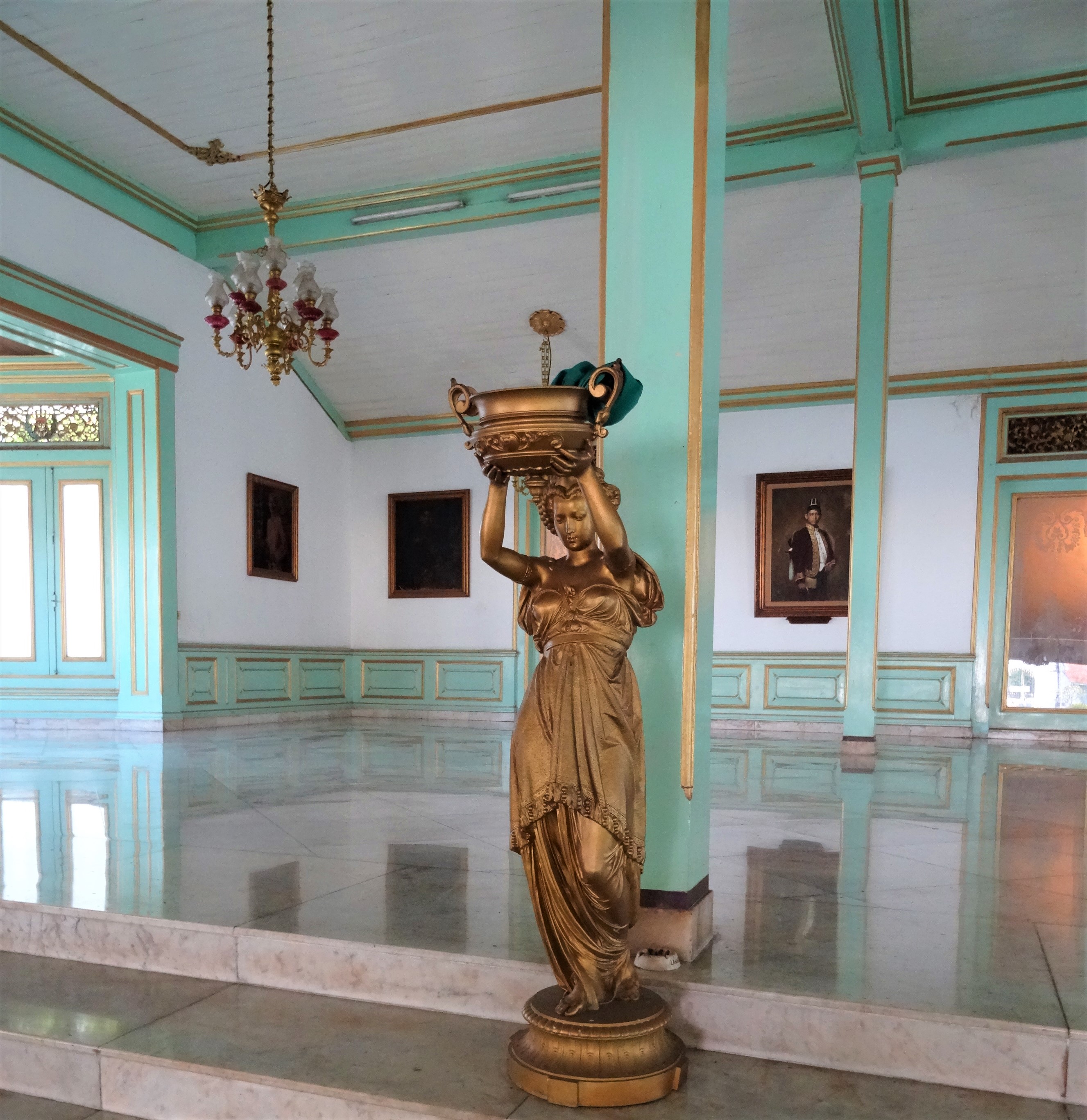 Mangkunagara’s kraton is built entirely of teak without using a nail. The museum in the hall of the kraton houses the private collection of Mangkunegara IV: antiques, jewelry, coins, wayang dolls and beautiful kerises. Mangkunagaran Palace has been well preserved.

The kraton comes to life with a guide who can explain the background of all objects with beautiful stories.

The Gladak district is home to Surakarta’s most important colonial buildings. There is an old fort (Vastenburg) barracks, churches, old European houses and hotels.

Pasar Triwindhu, is a well-known antiques and flea market. The market has been around since 1939 and was established in honor of the inauguration of the new Susoehoenan (Sultan) of Solo.

Anything older than 50 years is considered antiques, but many products are expertly counterfeit replicas that can hardly be distinguished from real antiques; sought after by visitors because of the lower price. The replicas are beautifully made. Ideal as original souvenirs. It is wonderful to roam around here. Practice smiling and haggling.

Sometimes cultural events are organized at the market.

Pasar Gede Hardjonagoro is a commodity market located in the old Chinese quarter. Pasar Gede means “big market”. The market is located in an Art Deco complex with Javanese influences and was designed in 1923 by Dutch architect Karsten. The building has been designed to stay cool and can accommodate more than 1000 merchants. It has already been rebuilt twice after a fire and each time restored to its original state. Here you will find vegetables, fruits, herbs and also local traditional delicacies.

The Chinese Quarter in Solo has been around since 1745. Today, about 4000 people live in this district, half of whom are of Chinese origin. The Chinese holidays, for example Chinese New Year, are celebrated here extensively. There are parades and the streets are decorated with thousands of lanterns. Tien Kak Sie temple is Surakarta’s oldest Chinese temple and is dedicated to Kwam-Im, goddess of mercy.

The great mosque (Masjid Agung) was built between 1763 and 1768 and is attached to the kraton. The mosque was built entirely according to regulations from the old Javanese architecture.

Make it easy for yourself and take a tour of old Solo with a guide who can tell you all about the historic buildings designed by architect Karsten, the palaces of the local monarchs, the antiques market and main market, the mosque and China Town. With a guide, the past comes to life and the background stories allow you to see the city with different eyes.

Surakarta, together with Yogyakarta, is the center of Javanese culture. The culture is still vividly present in the daily life of the residents of the city. Join a guide through the city and let yourself be surprised. Visit the workshops of, for example, a keris maker, see how a gamelan (musical instrument) is made, see how the leather puppets of the puppetry come to life, and how batik is made. Visit a dance and music school and the place where gemstones (each with their own symbolic meaning) are traded.

Cycling through the villages

A very nice tour to get acquainted with the local culture is this bike tour through the surroundings from Surakarta. You will cycle through the rice fields, stopping along the way at small family businesses that make traditional products such as tofu, tempe, gamelan, roof tiles, and arak (spirits).

On the way, the Bengawan Solo River (the longest river in Java and sung by many singers) is crossed by ferry. After the excursion you will be offered a lunch with local dishes. Obviously made by the locals.

In the old steam train with wooden wagons you imagine yourself 100 years back in time. The Jaladara steam train rides through the city every morning. The tour starts at Purwosari train station and ends at Sangkrah station. You will receive an explanation of what to see along the way in English.

This museum is the second oldest museum in Indonesia and founded in 1890. Here you will find literature in Old Javanese but also in Dutch, antique objects such as gamelan, krissen, and wayang puppets. The museum is small and simple, but full of interesting objects.

This museum provides an insight into the history of Indonesian media from colonial times to the present day. It is located in a colonial building from 1918.

Housed in a beautiful traditional Javanese building, you can learn all about batik in this museum. The museum has an impressive collection of antique textiles. And the museum pieces come not only from Indonesia, but also from other parts of Asia. It shows exactly how batik is made.

The museum has 350 antique cherries from different parts of Indonesia. In the museum you can also admire spears (tombak), swords (pedang) and knives (badik). The oldest keris in the collection dates from the 7th century. The museum was opened in 2017 by President Joko Widido, after the Keris was recognized by the United Nations (UNESCO) as an Intangible Cultural Heritage of Humanity.

Sangiran has been inhabited for a million and a half years. Excavations in Sangiran between 1936 and 1941 led to the discovery of the first hominin fossil. Since then, 50 more fossils have been found here. This is half of all known hominin fossils in the world. These finds are very important to understand the history of evolution. In 1996 Sangiran was recognized by UNESCO as a World Heritage Site