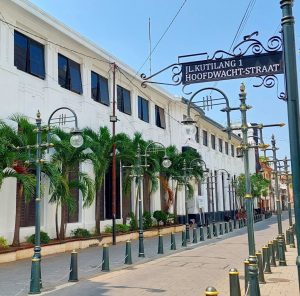 Semarang is a major harbour and trading city. It is a melting pot of different cultures. The city was officially founded in 1547 by the Islamic missionary Kyai Pandan Arang. At the beginning of the 15th century, Admiral Cheng Ho Zhenghe, as a representative from China (the Ming Dynasty), visited the region with a large fleet and tried to establish diplomatic and trade relations.

In 1678 Semarang came into the hands of the VOC. The VOC built a fort with 5 bastions called “De Vijfhoek”,(“Five Corners”) which existed until 1824. The fortress and later the old town was only accessible via the Berok bridge. The bridge owes its name to the Dutch word “bridge” (“brug”). Because “brug” was difficult to pronounce, the Javanese called the bridge “Berok”. 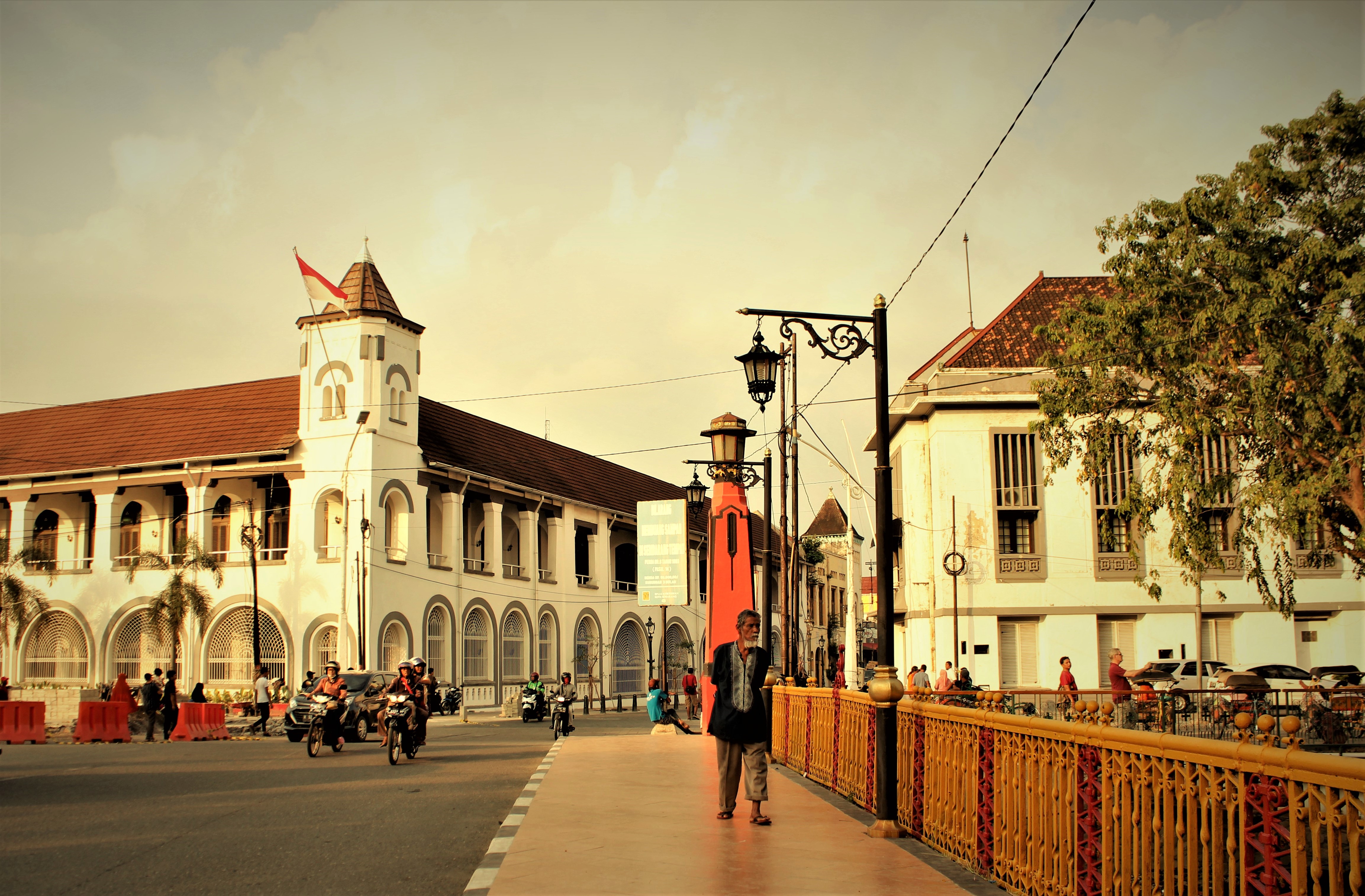 Due to the port, Semarang grew into a large trade center. Now the city has more than 1.5 million inhabitants. You can still see the influence of the different cultures everywhere.
After decay in the eighties and nineties, the old town is now being renovated and has now been nominated to UNESCO as a world heritage site.
In the old part of the city, the Kota Lama, you can walk around to explore the many remaining historic and unique buildings. For example, visit the Marabunta building, the old theater which can be recognised by the large red ants on the roof, where Mata Hari, the famous exotic danser and alleged spy, performed and where she is now immortalized in the old stained-glass windows.

Many buildings in old Semarang were designed by architect Karsten. Karsten left for the Dutch East Indies in 1914 and became an advisor to the municipality of Semarang. He designed many large, monumental buildings with art deco elements. In his later years he was an advocate of self-government for the Indonesians and was friends with Sukarno. 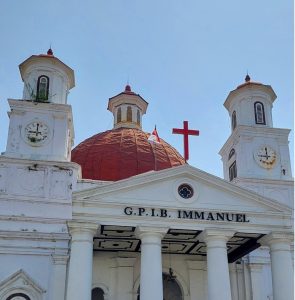 In the center of the old town is the Blenduk church. This church was built in 1753 and is the oldest Protestant church in Central Java. The church was rebuilt in 1894. The copper dome is said to have been built following the example of the St. Peter Basilica in the Vatican City. 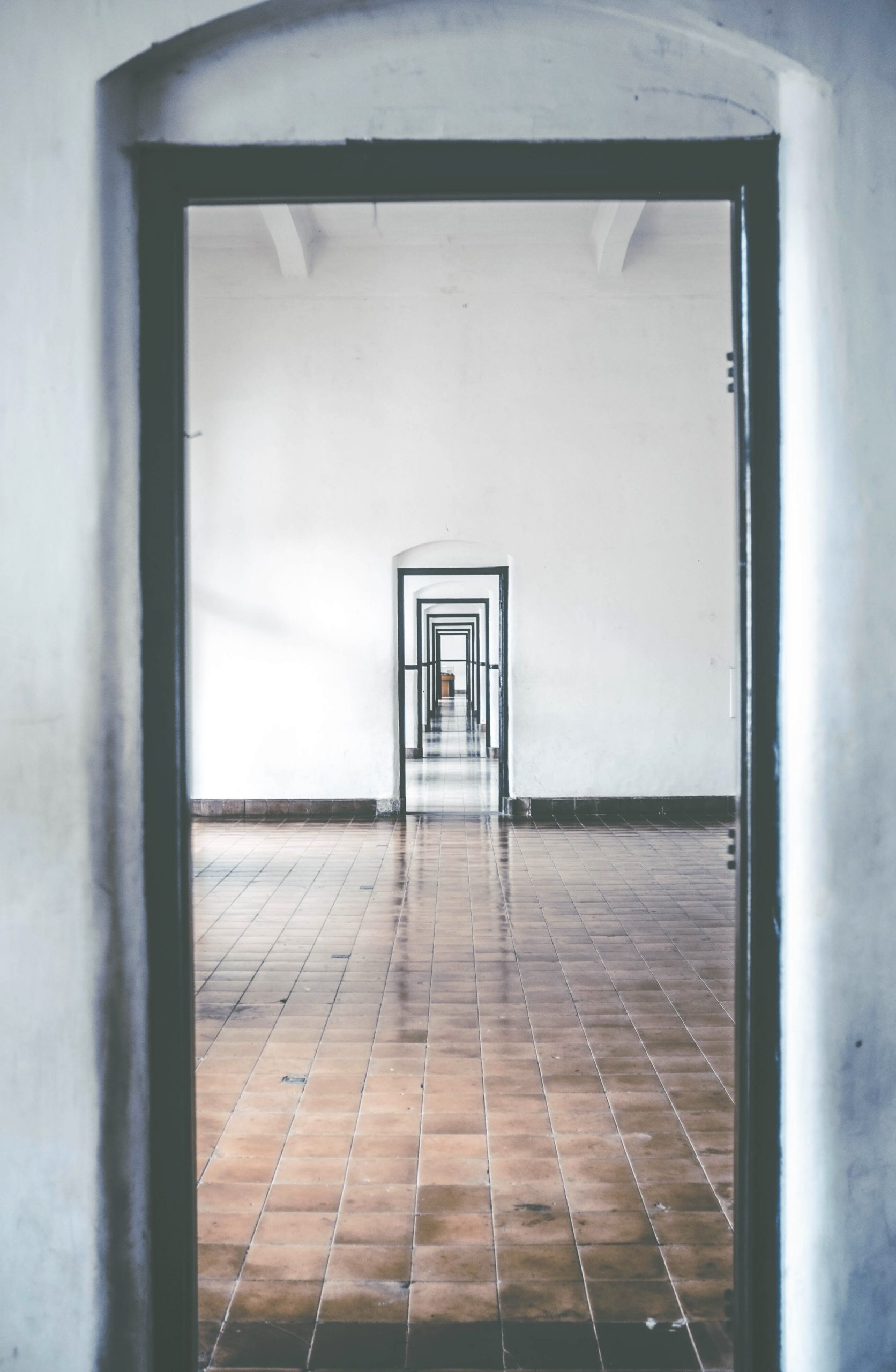 Lawang Sewu means “a thousand doors” in Javanese and this colonial building is indeed characterized by its many doors. It was built between 1904 and 1919 for the Dutch East Indies Railway Company. During the Japanese occupation it was used as a prison. Stained-glass windows with images of Amsterdam, Rotterdam and The Hague make us remember history. Once there used to be an underground tunnel to the governor’s office and the harbor. The basement of the building is said to be haunted. A horror film made in 2007 about this basement made many people shiver. 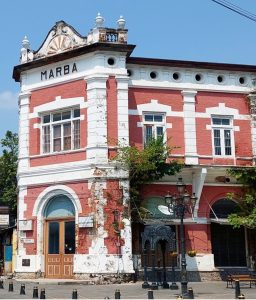 Semarang is nicknamed “Kota Jamu” (herbal drink city) because of the many factories for herbal drinks that the city once had. One of these factories was the herb factory “Nyonya Meneer”.

Nyonya Meneer (1895-1978) was the nickname of Mrs. Lauw Ping Nio. She originated from East Java and has run her own company for 50 years.

Toko Oen started more than 100 years ago (1910) as bakery for cookies in Yogyakarta. In 1922 the shop was transformed into an ice cream parlor, and later into a restaurant based on the Javanese, Chinese and Dutch cuisine. In the 1930s, the couple Oen also opened branches in Jakarta, Malang and Semarang.

Toko Oen can no longer be found in Jakarta and Yogyakarta. Only in Semarang Toko Oen is still run by the descendants of the Oen couple and the menu is still based on the old recipes. Just like in the past, the restaurant is known for typical Dutch dishes such as fried egg sandwich, Russian salad and cheese sticks. You can also buy Dutch specialties like Speculaas and mocha meringues. You can enjoy delicious food here. 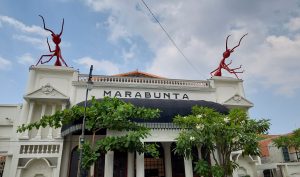 Your guide will bring the history Semarang back to life. In Semarang there are still many old buildings with just as many interesting stories from the colonial era. During an excursion of about 2 hours (about 3 km), the guide will tell the stories behind the buildings and the old town in English.

Are you in for more action? Discover Semarang by bicycle or even Vespa-scooter with an experienced guide and enjoy the different neighbourhoods. Ask about the possibilities, we are more than happy to arrange this for you! 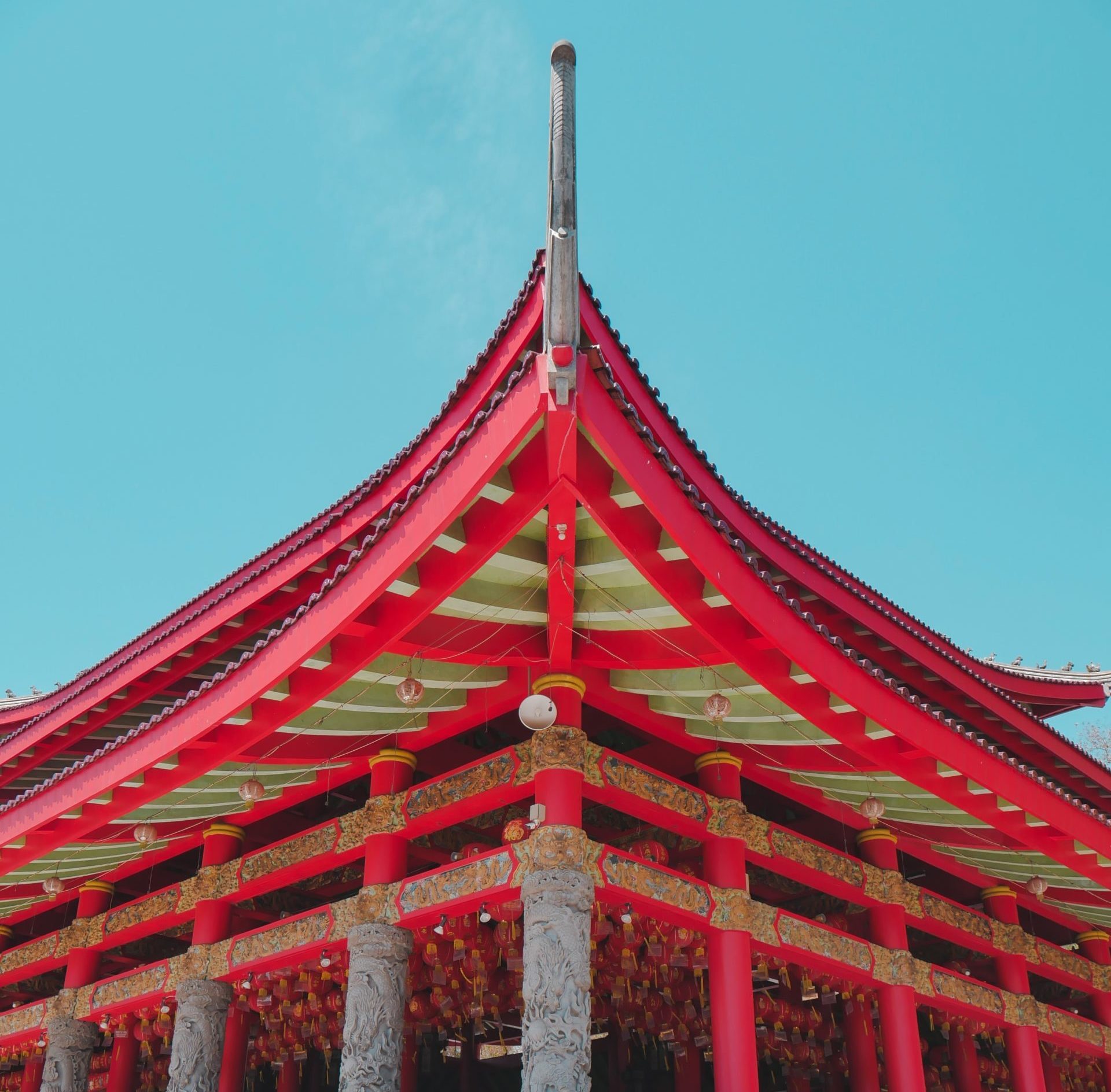 The Gedung Temple was built on the site where Ming Admiral Zheng He came ashore in 1406. Zheng He was a Muslim from Yunnan (China).

When Zheng He was 10 years old, the Ming army took over Yunnan. Zheng he was taken prisoner and had to join the army. He did his job so well that he was appointed advisor to the emperor and traveled all over the world as an explorer with hundreds of ships and 28,000 crew. Zheng He has visited many countries and it is even said that he was the one who discovered America (seventy years before Columbus).

After arriving in Java, Zheng He found a special cave in which he liked to pray. He built a temple near this cave. When he later left Java again, a large number of his crew stayed behind on Java. They married Javanese women and it is said that their descendants still live in the area of the temple. This temple is very special because both Muslims and Buddhists (ethnic Javanese and Chinese) come together in this temple to practice their faith.
The temple consists of a number of altars surrounding a cave. To the right of the cave is the tomb of Kyai Juru Mudi Dampoawang, the Islamic cleric of Zheng He. Believers like to sleep at his grave to receive his blessing.

Chinatown is an important part of Semarang. Already for a long time, Semarang has a large Chinese minority. Here you will find temples, attractive shops and good food. Stroll through Chinatown and get a taste of the real Chinese atmosphere.

At the Tay Kak Sie temple a replica of the ship with which Admiral Zheng He sailed to Java, can be found. In the evening on the weekend (from Friday to Sunday from 6 pm to 11 pm) there is a lively market with lots of delicious food. The ideal place to try all different kinds of authentic street food. It is also possible to discover Chinatown with a guide. The stories the guide can tell you, will make the city even more alive. 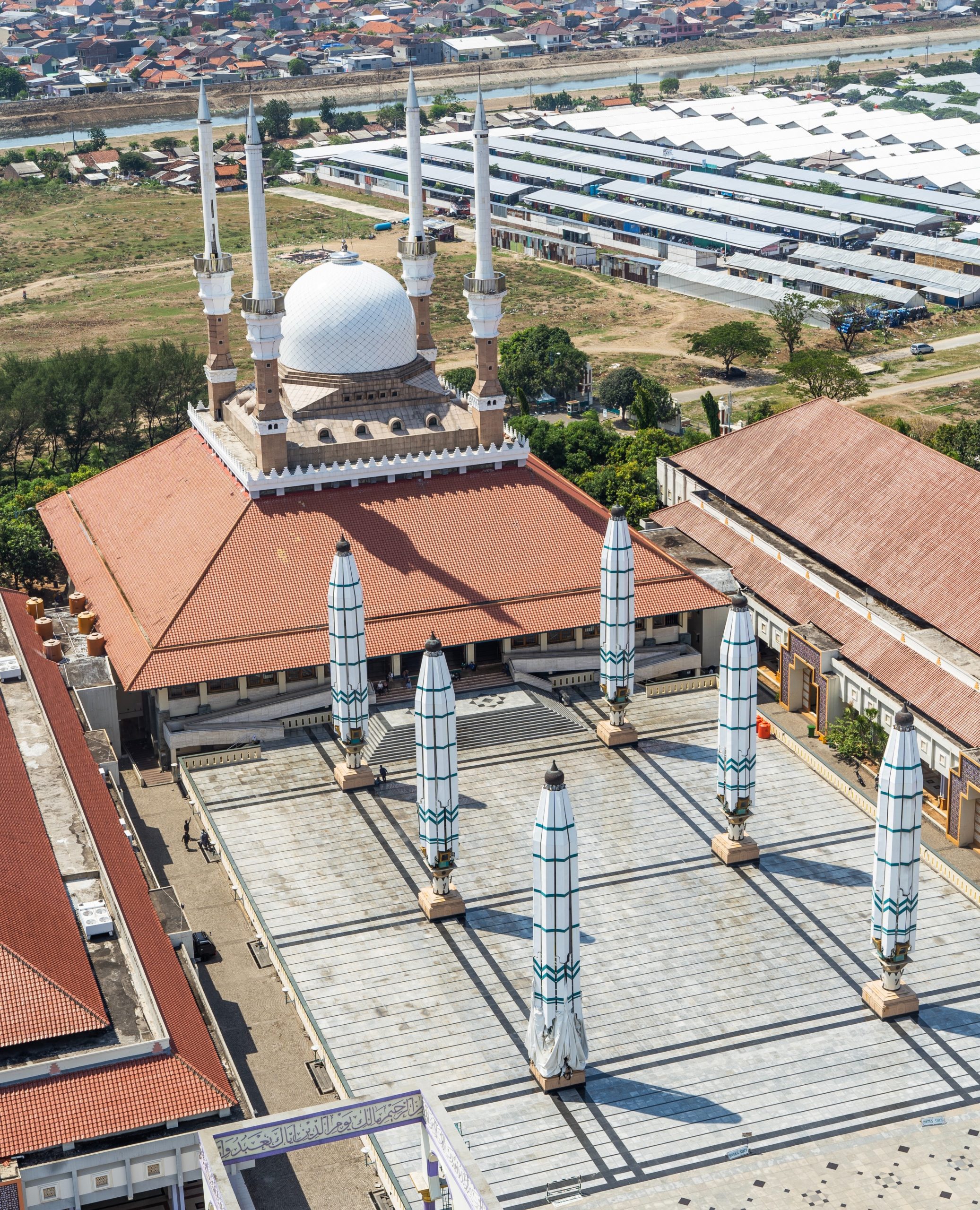 The mosque Agung (literally translated “great mosque”) is built in Javanese and Arabic style. Inside, the mosque is entirely decorated in Javanese style. Inside the mosque a large Quran, no less than 145 cm by 95 cm and handwritten by a Javanese calligrapher, can be admired. Next to the mosque is a tower of 99 meters high. Here you will find a small museum about the history of Islam and how Islam spread across Java. It is possible to go up with an elevator to have a beautiful view over the city. Especially at sunset.

During this full-day excrsion you travel accompanied by an expert guide who can tell you more about the period around the Second World War. We visit a former women’s camp that was located in a Catholic orphanage. Now this is an church complex. During the war, women and children were held here under very difficult conditions.

After this we go to the Kalibanteng war cemetery where more than 3100 war victims are buried. The cemetery is maintained by the Dutch War Graves Foundation. Here are two monuments to commemorate the women and children who stayed the camps.

It is also possible to visit Candi cemetery. About 1000 Dutch soldiers are buried here.

After this we go to a former shelter. After the capitulation of Japan, a power vacuum developed and the situation remained dangerous. From central Java many civilians were brought to Semarang to travel to Batavia, Singapore or further. One of the shelters was in the Van Deventer school, now called Kartini school. In addition to being a shelter, this school has a special history: This was one of the first schools for underprivileged Indonesian girls. Your guide can tell you more about this.

Kampung Pelangi is a district in Semarang that was transformed into a tourist attraction in only one month in 2017. The previously poor neighborhood was eligible for money to renovate the neighborhood. Hping to attract tourists, the houses were painted in rainbow colors. Within three weeks the plan was already a huge success. It is a beautiful sight, both from a distance and up close. The colorful district is very photogenic. Not only are the houses colored, local painters have also made paintings on walls. The residents of this community do their best to make their simple neighborhood as cheerful, clean and beautiful as possible. They are glad to see you here. 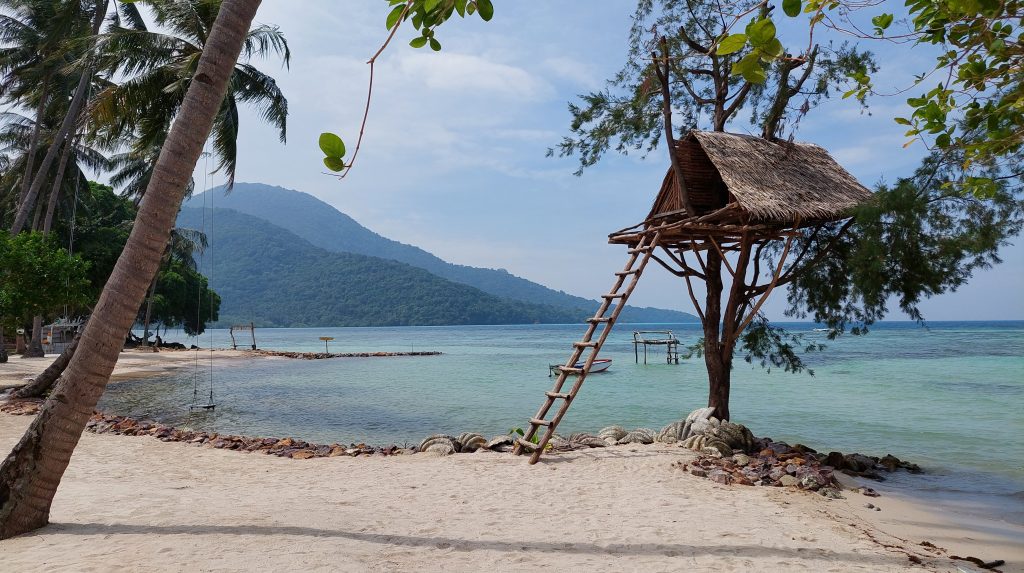 Karimunjawa consists of 27 islands and is located North of Semarang, 80 km from the coast, in the Java Sea. The name “Karimunjawa” is derived from the Javanese phrase: “kremun kremun saking tanah jawi”, loosely translated: “I see something vague from Java”.

The water here is clean, the sand is white and the islands are ideal for snorkeling or diving among the coral. The Indonor wreck (a ship that sank in 1960) is popular with divers. You can also enjoy hiking. The islands are not too touristic yet.

From the port of Jepara you can take the ferry or speed boat.